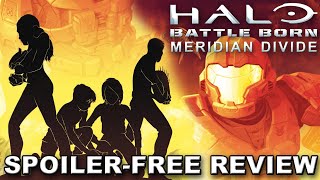 [ Music ] welcome back Canaanites. It really is the year of the sequel for halo books, isn't. It February gave us halo renegades. Last week we got halo, oblivion and today sees the release of halo battle, born ready and divided a sequel to January's, halo battle, born as before.

I was given a free copy of the book for review purposes. So please keep that in mind. While I give my thoughts set during the fall of Meridian, the battleborn series follows four teenagers as they fight back against the invading covenant.

The original novel saw them team up with a Spartan three named Owen Bo nine six, a name that should be fairly familiar to fans by now to harass the invading covenant and evacuate their hometown. At the end, the four were offered an opportunity to continue fighting against the Covenant.

Meridian divide picks up nine weeks later, with the teens having been trained by Oni and now being deployed to Meridian. When the book was first announced, several fans were weary of the teens, joining Oni and leading missions on Meridian, but rest assured that's.

Not what happens here at all. The teens have been recruited because of the covenants interest in a four-runner artifact in their hometown of Broome, sir mayor and Oni wants the teens to essentially serve as consultants attached to the Meridian militia, and that is what the teens do throughout this book.

There are certainly times when they take initiative, but it's, never in a manner that breaks suspension of disbelief or goes beyond the logic of the Halo universe. In many instances, militia members were only a year or two older than the main characters who a lot of people seem to ignore were around 17 or so in battle born and are more than likely 18.

By this point, at least, they are legally speaking, adults and the theme of coming into adulthood and understanding what that entails is at the very roots of the battle born series. Moreover, what battle board as a whole presents? Is they look at the civilian perspective of the Covenant war, the UNSC and Oni? We've, had these views here and there over the years, but the original novel dove into these subjects in a much deeper and for the character is more personal than has been done before.

Meridian divide continues that, of course, and even though these teens have been trained by Oni, they aren't part of Oni or the UNSC, or even the militia they serve with on Meridian. They are outsiders and that perspective is easily my favorite part of these books.

Of course, not everything is perfect, as one would expect the battles in this book. Weren't the most interesting for me to read, and I feel that the tension from the first novel was a little less in this one, which is kind of odd, since the stakes are still pretty high.

One thing that genuinely did annoy me, though, was how inconsistent Owen bo9 six could be at times without getting into specifics. He often brings up concerns about keeping the main characters as safe as possible, but there are times when he seems to forget this.

To be fair of the missions they're sent on are generally the safer ones relatively speaking, but it's odd for him to say that he wants to keep them away from danger. One moment then send them on a mission into the heart of covenant occupied broom, sir mayor a few pages later.

What I think will really be a point of contention among fans, though, is the ending. Obviously I won't talk about it in detail here, but while I found the reaction to battle board's ending to be overblown, to say the least, I can see the reaction to Meridian divides, ending to be far more contentious and With good reason, personally, I'm, not sure where I stand on it at this moment, as it entirely depends on how things are executed in the next novel.

It could be interesting, but it could equally be disastrous in that regard. We'll have to wait and see what really sets the battleborn series apart from other halo books is its target audience the young adult market, while halo, certainly hasn't, lacked success there, at least from anecdotal evidence how many halo fans Today started reading the books when they were in their early to mid teens.

It is a new opportunity for Halo 3 4 3 s deal with Scholastic means halo. Books are more likely to find their way into schools, meaning more potential fans to buy halo products and play Halo games as they grow up, or, in other words, an expanding audience.

However, what I personally found and continue to find most exciting is the challenges that this category of books presents. There are things that one can and cannot do in why a fiction, meaning authors, have to get creative with how they present or address certain topics and situations.

This is especially true with a series like Halo, a well-known military sci-fi in the case of the battleborn series. This is resulted in the much more civilian perspective that not only allows new readers to learn things alongside the characters without things feeling forced but allows longtime fans to gain a new perspective or a new.

Take on a perspective that isn't touched on very often when battle board was first announced. I was ecstatic and the final product did not disappoint. Meridian divide continues what made its predecessor great, but it does have its issues that I think knock it down just a bit, at least for now.

So with careful consideration, I have to give Meridian divided a 7.5 out of 10. It's. Still a good read, just not quite as good as battleborn, at least for now. As I said, the ending and how it's handled in a sequel could make or break Meridian divided and the battleborn series as a whole, so fingers crossed if you haven't already consider picking up halo battle born Meridian divide available.

Today, from book ebook and audiobook retailers, as always, if you're, looking at the audiobook route, consider doing so through my audible, affiliate link, audible trial, comm alo Canon through that you get a 30-day free trial and a free audiobook which can be Meridian.

Divided or any other book audible has all the halo books in audio form, plus hundreds of thousands more check the link in the description box below that's all for now, if you've read Meridian divide. Let me know what you thought in the comments below but try to avoid.

Spoilers we'll address those later thanks for watching and until next time this has been halo cannon thanks for watching everyone. I hope you enjoyed this video. If you did. Please consider subscribing and if you really love me hit that notification bell and leave a thumbs up these both really help out the channel I wouldn't, be where I am now without your views and support.

So once again, thank you. Keep on being awesome, canaanites