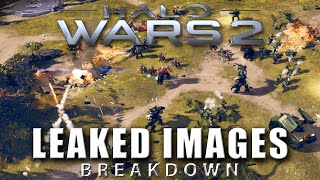 Well, after last week's league, I wasn't expecting anything on Halo Wars until III boy did. I call that one wrong. Just yesterday, a posting for the Halo Wars to open beta briefly appeared on the Xbox dashboard, along with a ton of images.

Some looked to be from the campaign. Others are clearly from multiplayer there's, a lot to analyze. So let's. Take a look. We'll start with the open beta listing. According to the listing this limited-time open beta, meaning anyone should be able to participate.

We'll, start on June 13th during e3 week and end the following Monday on June 20th. Damn that's, pretty amazing. Considering this thing starts on June 13th, I'm guessing that likely means right after the Xbox pre-show conference that day after the massive launch issues that accompanied the MCC Bonnie Ross personally promised that no Halo game would ever launch without a beta going forward.

So the existence of a Halo Wars - 2 beta isn't. All that surprising, however, for it to be announced like this well [ __ ]. Am i right well that's all for beta information? Let's! Move on to the big stuff, some high-quality images: first, we'll.

Take another quick look at the cover in much higher quality than before. As you can see, a lot of the stuff I discussed last time is pretty spot-on, brute style vehicles, the lesser arc, a mine to death, planetoid, etc, etc.

However, with the release of this image, we can pretty definitively say that the game is probably gonna, be set post hunters in the dark very likely post halo 5, the brute styled vehicles, including a brute banshee Plus this new vehicle.

That looks like a mini Reaper and whatever the hell. This is, and the art core pretty much confirmed the. When of the setting. Also, with this high quality image, we can clearly see that all the brutes are sporting new armor and the new weapon almost looks like something of a mega Spiker.

On the UNSC side, what was previously thought to be a Kodiak is most definitely a cyclops. I know at least one person said as much in the comments for my breakdown, video, so good call and with the quality of this image, I've, now counted at least 17 Spartans.

I'm almost certain. This is just artistic license, but given when this game is likely going to be set, even if it is in post halo 5, we can probably expect red team to be supported by Spartan force now on to the really good stuff.

First, a few images that look to be from the campaign. The first image shows UNSC forces, traversing some environment, perhaps the ark but maybe another location. We don't know we could see familiar UNSC soldiers, warthogs cyclopses, Cobra tanks and, interestingly, a Kodiak funny that the thing on the cover wasn't a Kodiak.

But here we have our first image pretty much confirming that it's in the game. The second image shows the UNSC taking on some covenant. We can see some recently blasted hunters down here what might be a vehicle over here and most interesting.

The presence of the grizzly tank, so if anyone was wondering its back, what's also interesting is that the Covenant, as you can see, are red throughout all the campaign images similar to how many of the war zone bosses appear in Halo 5.

I always found that decision to be kind of funny, so I'm wondering if now we might see why the UNSC chose red rather than more familiar colors for some of their bosses. Moving on, we have more UNSC forces, just move it along.

What looks to be a damaged one of those Reaper? Like things we saw on the cover, art and a pelican, it's, hard to say whether we'll actually be using these like. We would a sparrow hawk or a vulture, but they are present and to the delight of some people, I'm sure during the Covenant war-era style, lasting on this image.

You can see what's, most likely a Spartan carrying the classic rocket launcher over here. After that we have UNSC forces crossing a light bridge and finally UNSC forces taking on brutes and boy. Does it look Laureus? We can see that the brutes are supported by grunts, so we know it.

Just won't, be brutes and Eila Wars and in the bottom right a grizzly with a missile launcher as if they weren & # 39. T overpowered enough. So lots of interesting stuff for the campaign regarding the art style.

While I wish the models could look a bit more detailed, similar to what we saw in some of the early builds of Halo Wars, one they do have a solid color palette for both armies that stand out but allow for noticeable detail.

Now let's. Take a look at images that are more than likely for the multiplayer. Our first image features quite prominently, one of those Reaper things again. It fits this new brutish aesthetic of the Covenant vehicles, but it has something of a Promethean feel to it too.

So I wonder if maybe it is something that was given to the brutes by the created we'll, see beyond that. We get our first look at multiplayer, which, based on the images available, seems to be pretty exclusively UNSC vs.

covenant in all the images I'm, going to show the UNSC are red and the Covenant are blue. Now this is just a restriction of the beta or, if it's, the main plan for the final game. We can't yet say I'm, hoping it's, a beta, only restriction, though the original Halo Wars had a number of leaders to pick from to freshen things up, but seven years on.

I would hope that a sequel would have more than just two factions, even with multiple leaders. Anyway, back to the image. On the Covenant side, we can see brutes, grunts hunters and surprisingly, an honor guard sang Healy.

In the background, we can see the brute locust and in the foreground, a blue ghost just to know these aren't official names. I'm, just gonna call them brute whatever for the sake of discussion anyway.

What really seems to have caught people's, eyes is what is driving? That Ghost, which we can clearly see, is an elite with halo, 2 anniversary style armor. So, yes, the classic elites are back. On the UNSC side, we have basic Marines and flamethrower units.

Our next image shows covenant forces running around a very alien environment. This could either mean that halo wars, 2 has multiple locations or that environments on the ark will be varied either is pretty exciting.

In my opinion, pausing a moment, I really hope we get to see some ambient life this time around and if so, I hope they'll, actually attack you or enemy forces. I'm, just thinking back to hunters in the dark and all the beasts and creatures the UNSC and Sun Healy forces had to deal with and how cool it would be to see that stuff happen in Halo Wars to back to the image there's, nothing really else new to discuss, but we do get a better look at the brute locust, the head of which heavily reminds me of the halo 2 anniversary, multiplayer heretic Banshee.

I think we also get our best look at the brutes in this image with the armor they're wearing seeming to resemble something between halo, 2 and halo reach. Our next image features some flamethrower units burning the hell out of what I presume to be a ghost.

We can also see some other ghosts nearby and looking at them, you can see that the basic geometry seems to be based on the type 54 ghost from Halo 5. Here those ghosts is what looks to be a brute Wraith, which also looks to be based on the Halo 5 version, the type 58 to the right of that we can see a destroyed forerunner structure of some kind and at the bottom UNSC forces coming to back Up the flamethrowers, the environment looks very much like what we saw in the Ark in Halo 3, which makes me wonder if we'll see some familiar locations.

I talked before about the structure that looked to be the Citadel in the cover art and I wonder if maybe this area could be near the arcs cartographer. Our next image shows UNSC forces on a forerunner platform of some kind.

The glowing bit reminds me a bit of the circular structures on Colosseum give the way it looks. I wonder if this might be a giant Telepan of some kind in the foreground. We can see a vulture and towards the top left some Hornets confirming the return of both units.

Hopefully we'll, also get the sparrow hawk for our last image. We have UNSC had Covenant forces fighting by a forerunner structure which, interestingly, resembles the forerunner supply buildings from halo wars 1.

We see a six-legged vehicle with the back open, which i think might be the thing firing missiles on the cover art and over. Here we have what appears to be a chopper near the top. We have a solo UNSC unit that looks like it could be a Spartan, but it's hard to tell one way or the other, and that does it for these images.

There's a lot here with some very heavy implications for Halo Wars 2 and now I'm, even more excited for e3 next week, but how about you excited? Did you enjoy the images? Did I miss anything? Let me know in the comments below until next time.

This has been halo cannon. Hey guys, thanks for watching, if you like this video, please consider giving it a thumbs up, subscribing and sharing it around. You are the reason I get to keep doing this, so thank you profusely.

Thank you. If you want to dive deeper into halos lore head over to the halo archive it's, a lore based community that welcomes everyone from experts to rookies, no matter what your working knowledge you'll, be sure to find a friend and A good time